While I typically focus my articles toward high-ranking profit and loss leaders such as CEOs and line managers, I’d like to take the opportunity to discuss Level 1 leaders for staff departments, including: accounting, human resources, IT support, corporate communications, and legal. Oftentimes, top executives struggle with determining these individuals’ roles and evaluating their contribution, as Level 1 staff members are often seen as costly necessities to the rank and file employees, and have little impact on the company. They can be seen as bureaucrats or policy gatekeepers living off the revenue execution talent of others, and are often known to make business difficult.

Level 1 staff executives are paid sizable salaries and often benefit from large bonuses immune from enterprise performance. They can be seen to have little direct effect on profit, and are not held accountable except by subjective opinion relative to “likeability,” or their relationship with the CEO. Because they lack direct ownership for numerical KPIs, mediocre functional staff chiefs can skate for years without much quantitative accountability. Many are perceived to contribute only as process advisors when a crisis occurs for the line officers and client servers.

In numerous companies, employees have a right in evaluating the functional staff leadership as ‘maintenance personnel,’ in that they do not have the long-term competitive impact to justify their costs. This leadership can have considerable authority, but little quantitative accountability. If their only role is proven to be only functional transactions, the positions would be cheaper being outsourced or even automated.

Despite this, Level 1 functional staff can be the most valuable business leaders in the organization, if they are talented and their position is clearly defined and regulated.

I believe the most successful chief functional leaders of the best corporations are:

1) Leaders with a vision (versus bureaucrats); and 2) accountable for reshaping the enterprise to a more competitive position by spending much of their time on the future facilitation of the strategic intent. (If their focus is only on execution of daily transactions, they are the wrong people for the position. In my opinion, these individuals should have a title starting with “Manager of…” rather than “Chief of…”).

Let me briefly digress to make my point. In the early 1990s when the Japanese took major market shares from U.S. car manufacturers, it was speculated that the amazing quality of Japanese cars was their secret to success. That difference was measurable and certainly correct, but even as U.S. manufacturers improved (remember the Total Quality Management fad?), the Japanese still seemed to be one step ahead in attracting customers. I remember an interview given by a Japanese executive who explained their growing advantage with: “While the U.S. manufacturers are putting all their energy into unit quality improvement measured by number of defects per automobile, we defined quality a different way. Zero Defects is our base cultural minimum standards. We strive for that plus evaluating what features our customers want by relentlessly asking them, and even more, we are guessing by macro-trend and observation what features they could not describe, delighting them when they saw it.” The Japanese were actually two levels of value interpretation above their base culture of Zero Defects! That is why they were winning.

The same-tiered value-added concept is appropriate to corporate functional leaders. They should strive to be two levels above just doing transactions well. With that said, senior functional staff could be rated as follows:

Talent Level 1 (“Adequate but Mediocre”): Timely, accurate, effective, systematic and client-friendly transactions. This should be the base cultural level of performance acceptance.

Talent Level 2 (“Above Average & Operations Improvement”): All of Skill Level 1 plus understanding the cause, meaning, trend and forecast from the historical transaction data. Improving the organization to avoid the repetition of past issues.

Talent Level 3 (“Excellent Strategic Partner”): All of Skill Level 1 and 2, as well as using data analysis, future predictable macro-trends and knowledge of corporate capacity to prepare the enterprise in building the necessary capacity to fulfill the strategic intentions of creating a competitively superior future. 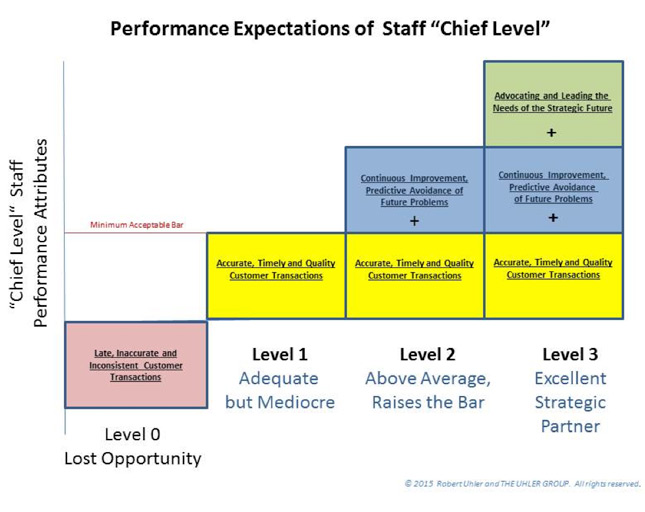 If that person is at Talent Level 3, they are designing the workforce of the future, which takes roughly a decade to create. They are describing the seniority concentrations at different levels and identifying the skills to combat the future disruptors to the business. They are tilting the hiring criteria to get the talent to match the strategic intentions for repositioning, and are working to create assignment rotations that might be five to seven years in the future. They are building a robust executive succession program for future top leadership.

But if all they are doing is processing the benefits programs, monitoring the annual salary increases, and renewing the health care programs, then they are, at best, Level 1. If the company can say: “We have no internal successors for the CEO,” then there is no effective succession program and the Chief Human Resources Officer should look in the mirror for failing their responsibility. The same self-examination can be done with other staff leadership jobs.

Finally, it is the obligation of the Chief Executive to have the vision of their Level 1 staff’s proper role. If they don’t see the functional leaders as executive leaders and assistant CEOs, (having a futuristic leadership responsibility), it is nearly impossible for the staff to assume the authority and responsibility on their own. Great companies are made of teams of talented people with different strengths and educations. If the top leader thinks it is an individual sport, the company is doomed for mediocrity. While a company might manage itself well today, more agile and futuristic competitors will inevitably pass it.

© 2015 Robert Uhler and THE UHLER GROUP. All rights reserved.

About the Author: Robert Uhler